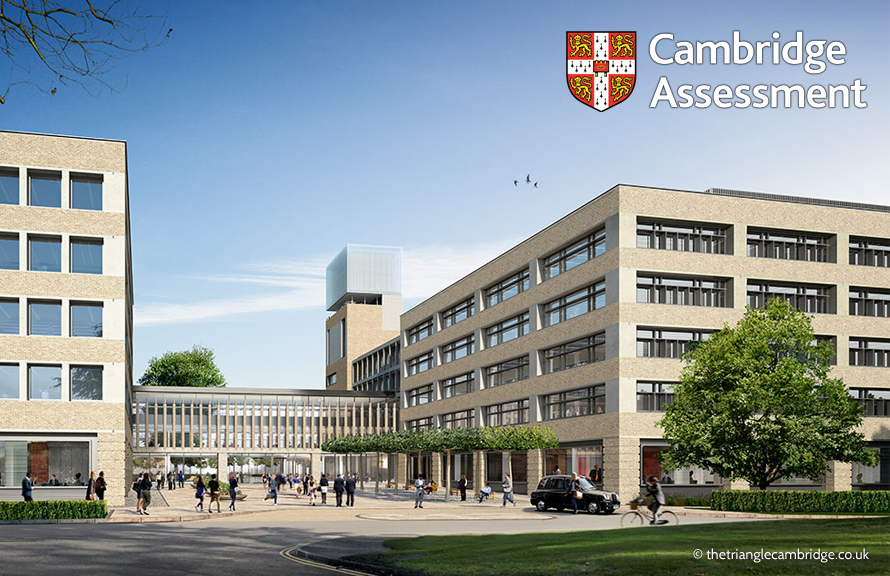 Called The Triangle, this new international headquarters will bring together all Cambridge Assessment’s Cambridge-based staff, currently based in 11 different offices across the city, under one roof. The site is on what was previously Cambridge University Press’s Edinburgh Building on Shaftesbury Road Cambridge, to the South-East of Cambridge city centre.

Established over 150 years ago, Cambridge Assessment is the University’s international exams group. A major local employer, it carries out leading edge academic and operational research on assessment in education, designing and delivering assessments to over 8 million learners in over 170 countries.

Outline planning permission was granted for the new headquarters in March 2015 and construction began in September 2015.

In August 2017 we started supplying the nearly 19,000 shrubs and trees needed to populate the gardens for the entire site – from the Rudbeckia hirta ‘Cherry Brandy’ P9s to the 7m Prunus serrulata ‘Kanzan’ weighing in at 2.5 tonnes!

We worked closely with 7 architects throughout as things – inevitably – changed shape. All large stock had to be craned in, so all weights had to be precisely calculated too – a real logistical challenge. But we do enjoy a challenge – it’s not all just “trees and shrubs”!

It was a fascinating project that we were delighted to be part of.

The development of The Triangle includes:

A couple of fascinating videos can be found on YouTube, giving unique perspectives of the project. A time-lapse condenses the 2 years between September 2015 and September 2017 to just 10 minutes! Another [shorter] video provides unique views of this impressive site from drone footage. Both are worth a watch if you get the chance.

Some copy courtesy of http://www.thetrianglecambridge.co.uk

This website uses cookies to improve your experience while you navigate through the website. Out of these, the cookies that are categorized as necessary are stored on your browser as they are essential for the working of basic functionalities of the website. We also use third-party cookies that help us analyze and understand how you use this website. These cookies will be stored in your browser only with your consent. You also have the option to opt-out of these cookies. But opting out of some of these cookies may affect your browsing experience.
Necessary Always Enabled
Necessary cookies are absolutely essential for the website to function properly. These cookies ensure basic functionalities and security features of the website, anonymously.
Functional
Functional cookies help to perform certain functionalities like sharing the content of the website on social media platforms, collect feedbacks, and other third-party features.
Performance
Performance cookies are used to understand and analyze the key performance indexes of the website which helps in delivering a better user experience for the visitors.
Analytics
Analytical cookies are used to understand how visitors interact with the website. These cookies help provide information on metrics the number of visitors, bounce rate, traffic source, etc.
Advertisement
Advertisement cookies are used to provide visitors with relevant ads and marketing campaigns. These cookies track visitors across websites and collect information to provide customized ads.
Others
Other uncategorized cookies are those that are being analyzed and have not been classified into a category as yet.
SAVE & ACCEPT